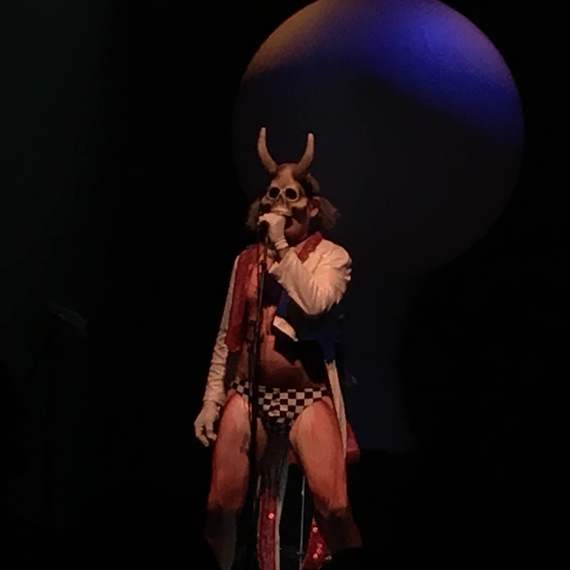 As my friend and I were negotiating our press passes we saw a guy come up wearing pleated Dockers and holding his roller blades under his arm. In my head I made up a whole narrative about him. I quipped to my pal Jordan; “I bet he was writing some nice software before he got here”. The scene outside The Gramercy Theater in Manhattan had the feel of a Grateful Dead show with hippies walking around with their fingers up. In the hippie vernacular this hand gesture means you are looking for a ticket. It goes back to Dead show culture. In my head I pictured this crowd more or less without the specifics.

It seems that at every gig in a mid-sized venue they do the pre-show pat down. It’s absurd to think fans of The Residents are going to start any violence. To stash my grass, I used the advice my homie Will gave me, which I wrote about in a previous post. The room was great. It could seat 600 or so. It was small and intimate. I was pleasantly surprised that they covered the dance floor with folding chairs. I had some anxiety earlier in the day about watching the opening film standing up.

I was very excited for this show. This was an interesting event in that the opening act was the new documentary about The Residents titled Theory of Obscurity. Director Don Hardy was on hand with some opening remarks as the people started to settle into their seats. Theory of Obscurity doesn’t make any claims to unmask the members of The Residents, whose identities have been kept secret since they began in the late 1960’s. To paraphrase the film, the ‘theory of obscurity’ is described as an idea in which artists do their best work when their identities are obscured. Obscurity liberates the artist. 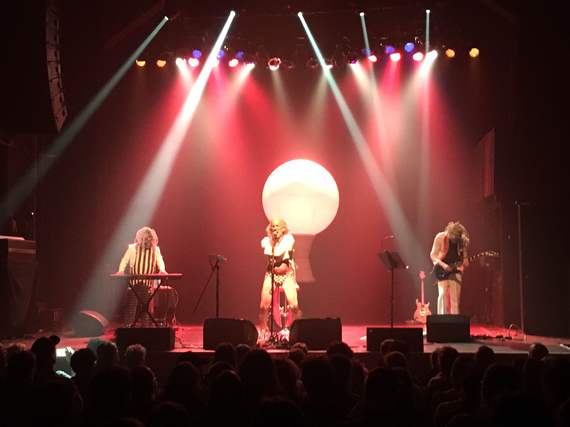 The film was highly enjoyable. The filmmakers interviewed members of The Cryptic Corporation (the Residents’ business agents), which was most revealing, including famous musicians like Jerry Harrison, and admirers like Penn Jillette. I enjoyed seeing Matt Groening, Gary Panter, and Jerry Casale in the mix as well. I was particularly taken with their unfinished feature film Vileness Fats which they released portions of years later as Whatever Happened To Vileness Fats ?. The documentary featured color photographs of the film, which revealed new levels of detail involved in its set design and costumes, which were lost due to the quality of the early videotapes they were using at the time.

The Residents are artists of the highest order. The film was inspiring, and it illustrated how these guys stayed committed to their vision for over 40 years! I was with my musician friend Jordan and we started exchanging all types of ideas after the film before The Residents set. They do that to you. Their work is a dystopian landscape that’s full of hope.

The Residents set was psychedelically striking. The costumes, set and the lights created this otherworldly experience, as if you were on LSD. What’s interesting about their music is that I don’t find it enjoyable in the traditional sense. Their music is difficult in a way that is grating and tuneless, yet paradoxically enjoyable. There were only three of them and no drummer. They played along to pre-recorded drums. The singer Randy looked just like the artist Paul McCarthy down to the bald cap. He was operating some kind of pedal to distort his voice. Their work seems to blur the edges of art and music. They seem to be artists and musicians in equal measures.

At some point in their long set, they did their “classic” Constantinople, which is the closest thing to a pop song I recall them doing the entire night.

Another interesting facet that I noticed that night is that people who appreciate the truly weird tend to find one another. There was nothing normal about the crowd and I suspect that the majority of the crowd was composed of artists of some kind. It’s overwhelming to be in a room with this many nerds. I found it refreshing to be at a show that didn’t aim to be hip and cool. The fact that The Residents exist after forty something years and continue to use modern technology to push their vision to outer reaches of consciousness is a testament to the undying creativity of the human spirit and the rewards of not compromising the value of total chaos. 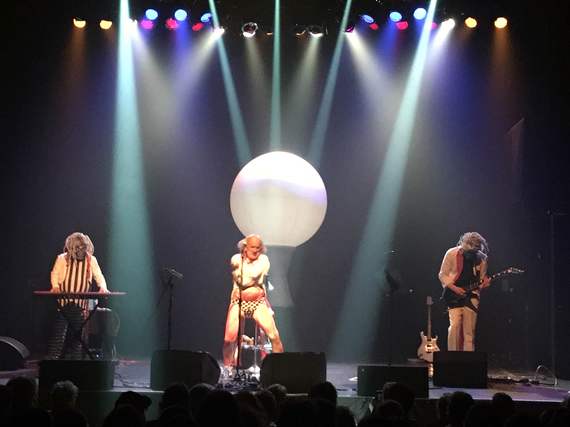